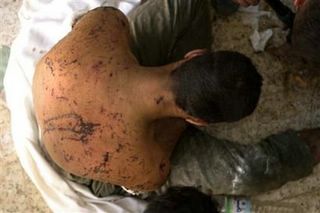 This photograph, made available by the U.S. Marines an Iraqi man sits on the floor with welts and lacerations across his back and arms from being tortured with electricity while held captive, according to the Marines. The man, along with three others, were discovered by Iraqi Security Forces and Marines from 3rd Battalion, 2nd Marine Regiment inside what the Marines say was an insurgent torture chamber in the city of Karabilah, Iraq during Operation Spear. (AP Photo/USMC Cpl Neill A. Sevelius)

You don't hear anything from the left on this sort of thing. They prefer to badmouth our boys for handling the Koran without using gloves and forcing a detainees to endure a women sitting on their lap. They embolden the dirtbags that are doing the real thing and are complicit in it's execution.