MSNBC is in serious trouble

This network is truly unwatchable.

This is the story of MSNBC in a nutshell: It rose to prominence on its criticism of George W. Bush, peaked during Barack Obama's historic 2008 campaign, and, by criticizing Republicans and championing liberal causes, sustained its viewership in the years that followed.

MSNBC suffered harder loses in 2013 -- in terms of both viewership and revenue -- than either of its competitors at Fox News and CNN, according to Nielsen data featured in a new Pew Research report. Prime-time viewership declined by a staggering 24 percent (nearly twice the loss sustained by CNN and four-times that sustained by Fox News). Daytime viewership fell by 15 percent, even as it rose at both of the other networks.

Sharyl Attkisson: There Is Coordination Between Reporters And Politicians

Of course there is, moreso now than ever.

Responding to comments regarding a Phoenix television reporter yesterday who initially claimed that the White House pre-screens questions from reporters, Attkisson said,

They do know it’s coming and they’ll call on you. There’s that kind of coordination sometimes. I wouldn’t be shocked if there’s sometimes more coordination. I don’t think it’s everybody on every briefing, every day. I’m pretty sure it’s not. But I think people would be surprised at the level of cooperation reporters have in general with politicians.”

On Thursday's NBC Today, co-host Savannah Guthrie touted an exclusive preview of Fortune magazine's list of the world's 50 greatest leaders and wondered about one name that was absent from the ranking: "Bill Clinton comes in at number five and makes the cover. There are a lot of other notable names here. Tell you what, though, there may be some talk about one leader who did not make the list, the leader of the free world, President Obama. Fortune tells us he was not overlooked, he just did not make the cut." [Listen to the audio or watch the video after the jump]

Posted by traderrob at 1:17 PM 0 comments

Black is white, cold is warm, up is down, it never stops with these lying Pos's

If Russia invades Alaska, just think how weak Putin will look then.

Senator Chris Murphy went to the Ukraine. Then he came back to appear on Chris Hayes’ All In on MSNBC to explain how everything is just fine.

“Frankly the fact that we are here today with a very weak Russia, having the entirety of the Ukraine turn away and having engaged in a panicky reaction is partly a result of the United States’ strength on this issue, standing with the protesters,” Senator Chris Murphy said.

Graphic of the Day 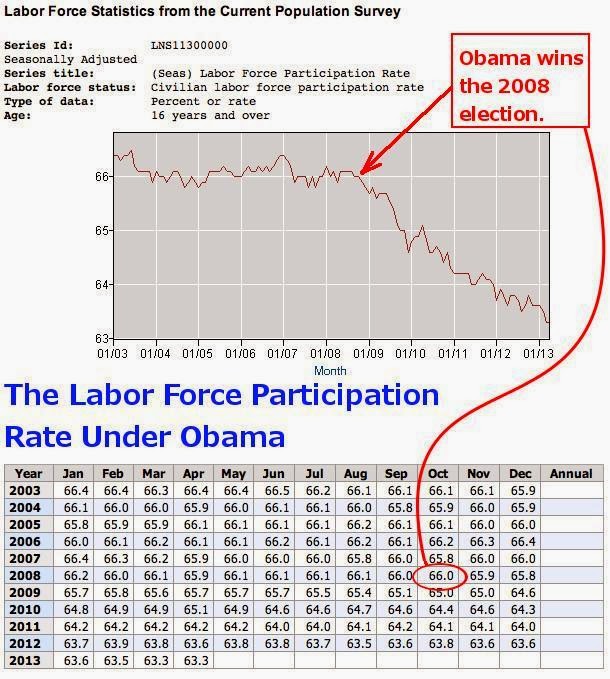 Posted by traderrob at 4:51 AM 0 comments 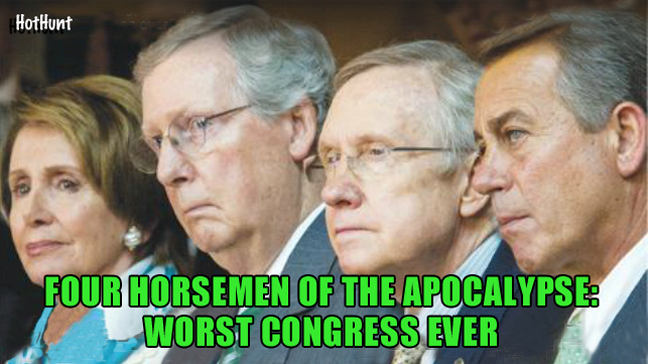 Thanks RR.
Posted by traderrob at 8:03 AM 0 comments

Well you could knock me over with a feather.

The United States Bureau of Labor Statistics (BLS) announced on March 12th that the total cost of employing a state or local government worker is 45% more than an equivalent worker in the private sector.

For the month of December 2013, employers in private industry spent an average of $29.63 per employee hour worked, but the equivalent cost for a government worker averaged $42.89 per hour. Not only do government employees average 33% higher pay than those in the private sector, their pension and retirement benefit costs are now an incredible 254% higher also. Given that compensation formulas for federal, state, and local government are comparable, it should come as no surprise that this year spending by the U.S. government will exceed revenue by an all-time high of $744.2 billion, and our gross national debt is a stunning $18.5 trillion.

Posted by traderrob at 8:13 AM 0 comments

These people obviously haven't been to the grocery store or gas station in the last 5 years.

U.S. producer prices fell in February, dragged down by falling costs for services and offering little sign of a pickup in inflation pressures.

U.S. inflation has held at a very low level in recent years because of a persistently high unemployment rate. This is expected to push the Federal Reserve to keep its benchmark interest rate near zero for many more months even as the central bank dials back its monetary stimulus.

Posted by traderrob at 1:01 PM 0 comments

Undeterred by a recent Public Policy Polling poll that showed he has only a 30% job approval in his native Arizona, Sen. John McCain said on Fox Business’ “Cavuto” that he is considering running for reelection. McCain denied the poll was accurate, saying, “There is a bogus poll out there. I can sense the people of my state.

When I travel around, which I do constantly, they like me, and I am very grateful.” McCain said he was “seriously considering” running for reelection in 2016, and would make the call “early next year.” He did reject the idea of running for president, allowing, “I’m afraid that it is not a viable option.”

Prosperity is impossible with a debt load of this crushing immensity.

Global debt outstanding, that is, all debts public and private, reached $100 trillion in mid-2013, the Bank for International Settlements (BIS) quarterly review revealed.

Credit outstanding has grown by more than $30 trillion since the financial crisis began in 2007.

When compared to data compiled by the Federal Reserve, the U.S. share of the $100 trillion is almost three-fifths — with about $58 trillion credit outstanding nationwide at the end of the second quarter in 2013.

Posted by traderrob at 8:22 AM 0 comments

They were for it before they were against it.

A national union that represents 300,000 low-wage hospitality workers charges in a new report that Obamacare will slam wages, cut hours, limit access to health insurance and worsen the very “income equality” President Obama says he is campaigning to fix.

Unite Here warned that due to Obamacare's much higher costs for health insurance than what union workers currently pay, the result will be a pay cut of up to $5 an hour. "If employers follow the incentives in the law, they will push families onto the exchanges to buy coverage. This will force low-wage service industry employees to spend $2.00, $3.00 or even $5.00 an hour of their pay to buy similar coverage," said the union in a new report.

MSNBC sets yet another new low for liberal"journalism"

Fresh from his becoming the republican nominee for governor in the Lone Star State, Greg Abbott is now the subject of attack by left-wing cable television station MSNBC. The liberal “news network” is following friends of Wendy Davis in going after the pro-life Texas gubernatorial candidate over his physical disability.

The simple sight of him in his wheelchair—matchstick-thin legs dangling in front of him as he maneuvers himself around—is enough to set him apart from the parade of conservative Republican white men who talk about helping the job creators and seem never to have suffered a day in their lives.

Posted by traderrob at 9:42 AM 0 comments

Of course it is, it makes perfect sense to everyone except Obama and the additional 22% of imbeciles in this country.

Americans support the idea of constructing the Keystone XL oil pipeline between Canada and the United States by a nearly 3 to 1 margin, with 65 percent saying it should be approved and 22 percent opposed, according to a new Washington Post-ABC News poll. The findings also show that the public thinks the massive project, which aims to ship 830,000 barrels of oil a day from Alberta and the northern Great Plains to refineries on the Gulf Coast, will produce significant economic benefits. Eighty-five percent say the pipeline would create a significant number of jobs, with 62 percent saying they “strongly” believed that to be the case. At the same time, nearly half of those interviewed — 47 percent — say they think Keystone will pose a significant risk to the environment.

Posted by traderrob at 1:45 PM 0 comments

Fox news usually polls Obama higher than most so it must be really really bad.

President Obama’s job approval rating hits a record low this week, as a majority of Americans say his administration has mostly failed at growing the economy, creating jobs, improving health care and the country’s image.

That’s according to a Fox News poll released Wednesday.

Shocked I tell you, SHOCKED!

Appearing in front of the House Oversight Committee Wednesday morning Lois Lerner, former head of tax exempt groups at the IRS, refused to answer questions asked by lawmakers by pleading the Fifth Amendment. Earlier this week, Lerner's attorney William Taylor confirmed to Committee members in an email that she would testify. Lerner was issued a subpoena last summer after admitting the IRS singled out conservative groups for extra scrutiny.

"On the advice of my counsel I respectfully exercise my fifth amendment right and decline to answer that question," Lerner said.

Posted by traderrob at 9:27 AM 0 comments

Kerry lands in Ukraine with promise of $1 billion in U.S. aid

That's the liberals answer to everything.....throw money at it and it will get better

The Obama administration said Tuesday it is working with Congress on $1 billion in loan guarantees for Ukraine, while a top Senate Republican said President Obama must undertake a “fundamental reevaluation” of the U.S. relationship with Russian President Vladimir Putin after his invasion of Ukraine’s Crimean peninsula.

Treasury Secretary Jack Lew said the loans “will be aimed at protecting the most vulnerable Ukrainian households” from the impact of needed economic reforms. He said the reforms will help to restore financial stability and economic growth in that nation.

Posted by traderrob at 6:22 AM 0 comments 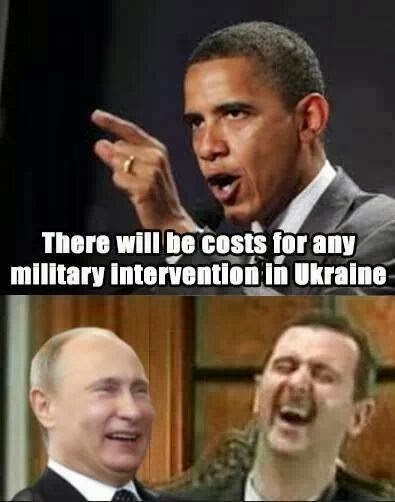 Why not, he certainly has nothing to fear from this country under the Obama administration

SIMFEROPOL, Ukraine (AP) — Russian troops took over the strategic Crimean peninsula Saturday without firing a shot. The newly installed government in Kiev was powerless to react, and despite calls by U.S. President Barack Obama for Russia to pull back its forces, Western governments had few options to counter Russia's military moves.

Ignoring President Barack Obama's warning Friday that "there will be costs" if Russia intervenes militarily, Putin sharply raised the stakes in the conflict over Ukraine's future evoking memories of Cold War brinkmanship.

Posted by traderrob at 7:00 PM 0 comments