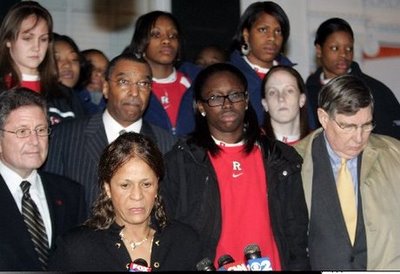 Shortly before midnight, they emerged and (coach) Stringer issued a brief statement in which she called the session "extremely productive."

"Hopefully, we can put this all behind us," she said, adding she and the team wanted to "let the healing process begin."

Alright it's official, a good chunk of the population of this country has gone COMPLETELY FREAKIN NUTS! LET THE HEALING PROCESS BEGIN???

What ever happened to sticks and stones can break my bones but words can never hurt me? Are we as a nation so G*D&*%$..ed woosified that a inconsequential albeit stupid statement made in jest requires a healing process? What an overinflated, exagerrated, self important, hyper-sensitive bunch of moronic drama queens.

PS... This analysis coming from someone who has in the past been called a "nappy headed Polack". Although not being of Polish decent I am on occasion "nappy headed".
Posted by traderrob at 12:02 PM