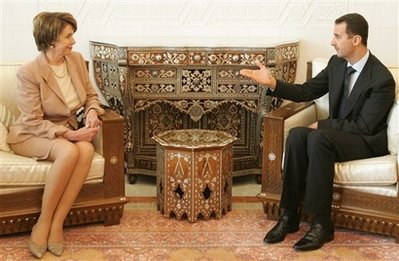 What can she possibly hope to accomplish other than to undermine our foreign policy and irritate the administration? Answer: That.

Syrian President Bashar Assad meets on Wednesday, April 4, 2007 with U.S. House speaker Nancy Pelosi at Ash-Shaeb presidential palace in Damascus. Pelosi arrived here Tuesday as the highest ranking US official to visit Syria since 2003 for talks with the Syrian leadership on the strained relations between Syria and the U.S., to convey a peace message from Israeli Prime Minister Ehud Olmert to President Assad, and to discuss Iraq and other regional issues with Syria. Pelosi's visit was criticized by the US administration.(AP Photo Hussein Malla).

Posted by traderrob at 4:23 AM