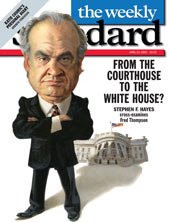 Powerline has an excellent synopsis of an article coming out next week in the Weekly Standard.

If he joins the race for the Republican nomination, and if he campaigns the same way he spoke to me last week, Fred Thompson, a mild-mannered, slow-talking southern gentleman, will run as the politically aggressive conservative that George W. Bush hasn't been for four years. And the actor in the race could well be the most authentic personality in the field.

Thompson seems to recognize that he wins the guy-I'd-want-to-get-a-beer-with primary the moment he announces. He comes across as a regular guy--"folksy" will be the political cliché that attaches to his candidacy--and punctuates explanations of his positions with the kind of off-the-cuff homespun witticisms that Dan Rather spent a career trying to come up with.

Posted by traderrob at 6:03 AM