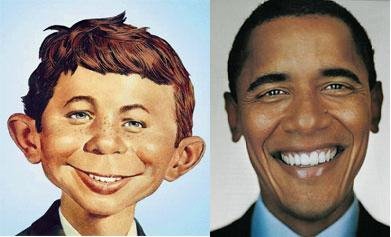 I would prefer to see him depicted as Alfred E. Newman as it would be far less offensive and a good deal more accurate.

The exhibit, titled "Blessing," shows Obama cloaked in white and red robes with a neon halo, is on display at the School of the Art Institute of Chicago.

"He's sort of emerged as this really sort of charismatic and really popular person. I think that people really like him and I think it's because of his message of unity and sort of his political platform," David Cordero, the artist and a student at the school, said of the Illinois senator.
Posted by traderrob at 10:46 AM