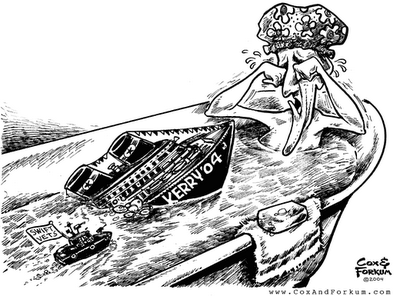 BWAAAAHAHAHA, atta boy GW, nothing like a little castor beans to the eyes.

President Bush named Republican fundraiser Sam Fox as U.S. ambassador to Belgium on Wednesday, using a maneuver that allowed him to bypass Congress where Democrats had derailed Fox's nomination.

Democrats had denounced Fox for his 2004 donation to the Swift Boat Veterans for Truth. The group's TV ads, which claimed that Sen. John Kerry exaggerated his military record in Vietnam, were viewed as a major factor in the Massachusetts Democrat losing the election.

Recognizing Fox did not have the votes to obtain Senate confirmation, Bush withdrew the nomination last month. On Wednesday, with Congress out of town for a spring break, the president used his power to make recess appointments to put Fox in the job without Senate confirmation.
Posted by traderrob at 2:02 PM