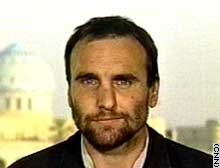 A relatively new but increasingly common occupation known as the activist/journalist....

During a live press conference in Bagdad, Senators McCain and Graham were heckled by CNN reporter Michael Ware. An official at the press conference called Ware’s conduct “outrageous,” saying, “here you have two United States Senators in Bagdad giving first-hand reports while Ware is laughing and mocking their comments.

I’ve never witnessed such disrespect. This guy is an activist not a reporter.” Senators McCain and Graham flew into Iraq and drove into Bagdad, making stops at an open market and a joint Iraq/American military security outpost before appearing at the press conference.

Update: It appears that Drudge may have issued an erronious report . Although this in no way changes our opinion of the ever agenda driven Ware and his reporting, we do not need "made up" scenarios to further our position. We'll leave that to the left.
Posted by traderrob at 11:41 AM