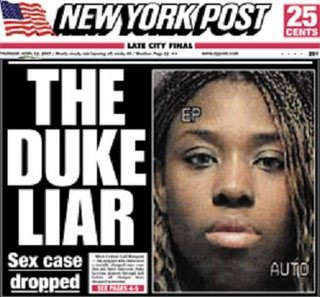 I wonder if the group of 88 Duke faculty members will write a letter on her behalf this time.

DURHAM, N.C. — Family members of a man who was stabbed in his home April 3 say he died Wednesday evening. Crystal Mangum, the Durham woman who falsely accused three Duke University lacrosse players of rape in 2006, has been charged with assaulting him.

"The case remains under investigation, and we do anticipate upgrading the charges. However, no new charges have been filed at this time," police spokeswoman Kammie Michael said in an e-mail to WRAL News.

Police said Mangum, 32, stabbed Daye in the torso with a kitchen knife during a dispute at 3507 Century Oaks Drive early on April 3.

Posted by traderrob at 7:08 AM